The sports supplement industry is blossoming, thanks to our fitness-obsessed culture. But do these pills and powders actually help? The experts are not convinced, finds Andrew Griffiths 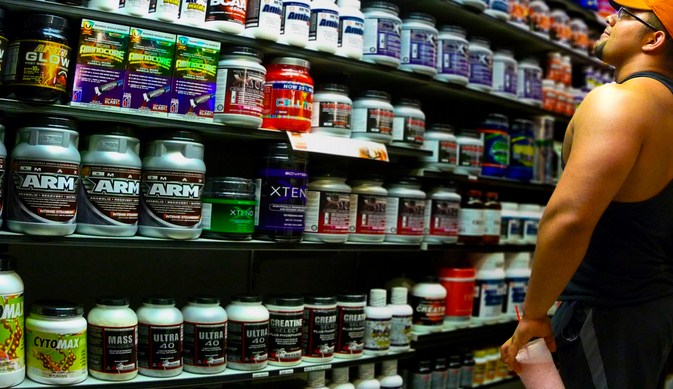 Take one bag of powdered protein, another of carbohydrate, a spot of caffeine, some creatine, a bit of capsicum, some green tea extract, bag them up in various proportions, and you are pretty much ready to join the booming sports supplement industry.

Last year alone, the sports supplement industry was worth £301m in the UK, and that figure is forecast to grow to £471m by 2018. As a result, dedicated sports nutrition shops are springing up on our high streets – gym obsessives and fitness freaks no longer need to burrow deep into a corner of their local health food store to find a hit of protein powder or an isotonic energy gel.

But browse round these stores (taking care to negotiate your way around the pectorals of the chap at the till who looks like he recently ingested the shop’s entire stock in one hedonistic binge) and you have to ask: do these nutritional supplements actually work? Can they improve your sporting performance?

Dr Kevin Currell, Head of Performance Nutrition for the English Institute of Sport, oversees a team that works across 30 Olympic, Paralympic and professional sports. He is in charge of satisfying one serious bunch of appetites – and he maintains that the best source of fuel comes from good, old fashioned food.

“The food that we eat is incredibly powerful,” says Currell. “It has huge effects on us. It can keep us healthy, and in exercise terms it can reduce the risk of injury and illness. It can facilitate the adaptation to training, whether you want to build muscle or run a marathon, and it can make you faster. There is loads of stuff you can do around food, just with food.”

Currell isn’t against all supplements, but he stresses that if they are used, they should be used in context. So a protein supplement that might help build muscle if you are hammering the weights in the gym isn’t going to be much use to you if your thing is endurance training for a marathon.

But again, Currell is keen to stress the importance of a good diet and training as the two keys to sporting success, whatever your game.

“Supplements aren’t the magic bullet that I think some people think they are.” he says. Take the example of building muscle. Currell acknowledges that protein plays an important role, and that protein supplements provide a handy way of consuming the extra intake – “but a steak or a pint of milk is probably just as good a form of supplement protein.”

Equally, carbohydrate based supplements can help with endurance events by giving your body a good source of fuel to burn. But how do we choose from the bewildering array of ‘scientifically proven’ formulations available?

“If you are running a marathon, you want simple sugars,” says Currell. “So glucose or maltodextrin in the simplest forms. And maybe a bit of fructose in there too, to enhance the absorption of that sugar. Does it need to get any fancier than that? No, I don’t think it does.”

In Currell’s opinion, 50pc of the sports supplement market is for “convenience”, and these products are often used to avoid cooking and eating proper food.

King Solomon Mensah is a personal trainer for the PureGym chain based in Leeds, and his experience would seem to back up Currell’s suspicions. When clients first come to him, he finds many are using supplements as meal replacements.

“Being realistic, I understand why my clients do it,” he says, acknowledging the reality that many people are busy and short of time. “But there is nothing better than real food.”

Mensah thinks that a lot of the supplement industry is “fashion” – particularly among office workers. “Their colleagues will be taking a supplement so they will too because they say it works for them. But they need to realise that everybody is different,”, says Mensah. “So what works for one person isn’t necessarily going to work for somebody else.”

Currell too can understand why it is tempting for busy people to use these supplements as meal replacements, because they are “incredibly convenient”. It is all very well to say that you can get the same – indeed far better – nutritional value out of a home-cooked meal, but it takes time to prepare, then to cook, then to eat, then a couple of hours to digest. Which begs the question: when are you supposed to actually use that body you are so carefully nurturing?

Despite Currell’s urging that we should take time to make the effort, it seems that many of us are happy enough to contract out a large part of our digestive system to the sports supplement companies. Does skipping meals and replacing them with supplements do active people any harm?

“The answer is we really don’t know what the health implications of doing this are.” says Currell. “Essentially they are processed food, processed powders. I believe that the less processed the food, the better it is for you. That is my opinion and how I work as a nutritionist. And these are highly processed foods.”

I finish by asking Dr Currell what he thinks of the popular fat burning products, which people take in the hope that it will rid them of their final layer of fat and allow their skin to mold like cling-film over a set of finely honed abs.

There is a pause.

“I am assuming that swearing is not the best thing to do at this point?”

“There is absolutely no science behind them whatsoever, to me they are a big rip off.” says Currell. “Its not that magic bullet that you are going to be able to eat everything you want then get that magic six pack. The way you are going to do that is by training hard and eating appropriately, not by popping some pill that in some cases probably can be dangerous. I would never recommend them to an athlete. As a scientist, I can’t even understand how they are marketed as science.”

“Unfortunately, it is those kinds of thing that probably give the supplement market a bad name.” he continues.

Currell sums up his thoughts on the sports supplement market: “Sugary sports drinks enhance endurance. Protein is going to help you build muscle. There are things like caffeine and creatine that have good science behind them. And then there are things like fat burners, where you might as well wash your money down the drain.”